Posted by Roger Senecal at 14:57 No comments:

My recent solar update is a guest blog posting on Green Living Ottawa.  I'll be at today's second annual Ottawa Solar Fair - hope to see you there! There's also an opportunity to get a map of solar installations around the city - I'll be answering questions at home this afternoon for those interested in stopping by once the fair wraps up. Here's a photo from the SLOWest solar tour in May. We were the first stop on the tour - there were over 30 participants! 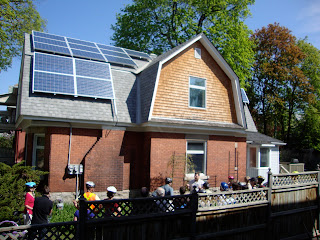 Posted by Roger Senecal at 06:13 No comments:

As mentioned in a previous post, last summer we had solar panels installed on the roof of our central Ottawa home.  At the end of August, we became small-scale energy producers, selling power back to the grid under Ontario’s Microfit program.  Our photovoltaic system (solar electric) consists of 20 panels (called an array), and a grid-tie inverter, which converts the panels DC power to the grid’s AC power.  Our system is a 4.8 KW system, that should produce about $4500 income this year. Now on a sunny day, my 5 year old daughter asks “how much energy did we produce?”

Why would you consider Solar Power?

Be Part of the Solution. Photovoltaics are an important part of a portfolio of renewable energy options in Ottawa. Solar panels produce power when it’s most needed during the day when demand peaks, and where it is needed reducing transmission and distribution losses.  Solar doesn’t have the huge infrastructure costs and environmental footprint of conventional energy projects. It also leverages private equity instead of public money to increase generation capacity.

Ontario has a World Class Solar Program. Ontario’s Microfit program offers producers a 20 year contract to at a fixed rate purchase price per kilowatt hour. While the rate was recently reduced to reflect and further encourage efficiencies in the supply of new systems, the program still makes solar power attractive.

Ottawa has great solar potential and limited wind. If you want to make a proactive move in small-scale renewable energy, solar is a smart choice if you’re living in Ottawa.

If you are thinking about a solar power installation in Ottawa, here are some considerations to think about.

Do you have a roof with solar exposure? Ideally you would have near southern exposure to maximize solar potential.  The orientation of streets in Ottawa are slightly angled so it is likely you won’t have perfect southern exposure but 15 degrees East or West is still great.

Are you going to have solar exposure for the next 20 years? Under the microfit program, you sign a contract with the Ontario Power Authority for 20 years. It’s worth checking to see if there are development changes around you that could impact your sun exposure.

Can you connect to the energy grid to sell power where you are? Through the Microfit application process, Hydro Ottawa can confirm whether the grid near your home would support a solar installation.

How will you finance the solar project? Ontario’s Microfit program offers a subsidized rate you will be paid per kilowatt hour, so solar power can be an income generating project. The upfront cost of the panels and installation can be costly, and is often the biggest consideration for people considering solar. The payback period varies on the size of the project – generally the larger the array, the more energy produced, and the shorter the payback period.

Learning more about solar Power in Ottawa.
This weekend in Ottawa there’s a great opportunity to learn more about solar polar! The Second Annual Ottawa Solar Power Fair will be held on June 16th at the Ottawa City Hall.  The fair begins at 9am and will run till noon. Attendance is free! There will also be a map available for those interested in touring solar installations around the city.
Posted by Roger Senecal at 04:10 No comments:

A recent post on Environmental and Energy Management News has highlighted a successful energy reduction project by Ottawa's OC Transpo. An LED light energy retrofit resulted in a lighting cost reduction of 43 percent at its St. Laurent garage. The project focused on replacing inefficient light fixtures and adding sensors to turn off lighting when it's not needed. Energy Ottawa expects the retrofit to cut energy costs by more than $137,000 each year. Maintenance costs will also be reduced because the energy-efficient lamps last more than 75 percent longer than traditional lamps.
Posted by Roger Senecal at 18:57 No comments:

This month's Canadian Geographic is all about energy. One article explores sustainable home building and some interesting projects across Canada. I've pasted the link below to the online edition of the magazine if you're interested in reading more. 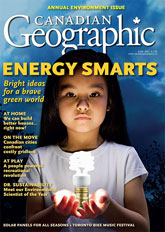 Posted by Roger Senecal at 17:46 No comments: